Rajinikanth's "Kabali" is an action-thriller, written and directed by two-film old Pa Ranjith. The prestigious film is produced by Kalaippuli S Thanu, who is basking in the success of his recent hit film "Theri."

Within in one day the teaser of the film managed to achieve 4,85,172 views and 16,777 likes on youtube, Teaser received many appraisals for the dialogue delivery & action performance which was excellent and awesome. Thailava fans are eagerly waiting with immense care to watch the film on the first day of release, No words to say or to describe as Rajinikanth Kabali raised goosebumps among the fans with the teaser setting next level expectations. 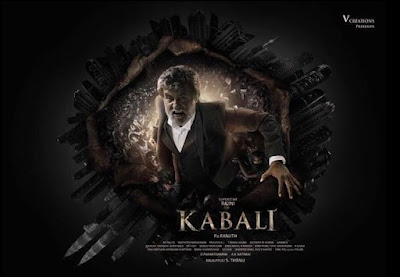 The movie has got fairly positive reviews from the audience. People are loving Rajinikanth's introductory scene and his electrifying presence. The audience say that the narration is bit slow but has a strong subject. Overall, it is an emotional film. We bring you live updates from it. Find, the audience's response to the movie:

#Kabali First Half @beemji has shown to the world that Thalaivar is one of the best actor in Indian Cinema. Intro & scenes after it was MASS

#Kabali Can watch the movie again & again for first 15 Minutes Mass itself & then complete Class . Interval block will surprise u..

‪#‎Kabali‬ First Half - Ranjith has shown to the world that Thalaivar is one of the best actor in Indian Cinema. First 10 Minutes sema mass & interesting interval block.

Kaushik (LMK): #Kabali 1st half -To begin with, the older #Rajini's style,swag are magical. The movie then moves leisurely, picks up again towards interval

#Kabali 2nd half - The moving reunion scene is a plus thx to @radhika_apte. Otherwise, disappointing with the usual gang wars & bad climax
#Kabali -Falls way short of the huge expectations. A disappointing feeling. Neither a massy #SuperStar film nor a Madras level Ranjith film

#Kabali 2.75 / 5.. Except a few sparkling moments of mass and emotions, a big letdown.. Fans and audiences deserved much much better.
Rajasekar: #Kabali first half - Yes, there was an initial excitement to see the man on big screen. Otherwise blunt, nothing much going. So far average!

Ramesh B: #Kabali 1st Half: #Thalaivar simply rocks.. Mersal intro.. That swag throughout.. Only #Thalaivar can do at this age.. Action seq - Mass

VJ Abhishek: Who can make a non-rajini film wid #Rajini ? @beemji shows d plight of an aging gangster haunted by his past #Kabali 's 1st half- SOFT

Vignesh Kandaswamy: #Kabali -Interval - So far okay. Good start followed by a slow 30 mins hampered the narration. Last half an hour brought the excitement back

#Kabali - Superstar has given his best at this age. Nice to see him take the back seat at some portions and let others perform. A new kind.

#Kabali - Flashback portions, thundering start and Santhosh BGM are the major +ves of first half.
KRK: It's interval n what an emotional film #Kabali! I am sure, it will be one of the biggest hit film of mega star Rajnikant.
What a great film #Kabali! Full of emotions n patriotism. It's going to be sure shot blockbuster all over south India. Salute to Rajnikant.
Can someone tell me name of the girl who played Rajnikant's daughter in #Kabali ? She is really hot n sexy.

Hey @saidhanshika you have done great job in #Kabali n you are looking really hot there. Your neck tattoo! Uff Qyamat!

#Kabali: Average. Partly satisfying drama which blows hot and cold. Rajinikanth totally rocks his role, Ranjith not too much.

#Kabali: Ranjith gets the action & the swag right, presenting Rajinikanth in a way we haven't seen him. It's the emotions that don't gel.
#Kabali: Technically rock solid in each department. SaNa has delivered his best in the background score, hugely riveting music.

Got tickets. Got in. Got seated. Magizhchi, the show begins. #Kabali
ChristopherKanagaraj: #Kabali - Its neither Rajini film nor Ranjith film, falls in between. Superstar's screen presence v make this slow paced film a watchable 1.

#Kabali : 2nd half - the scene which gives lead go Mayanadhi song is outstanding. Overall It's neither a complete Ranjith nor a Rajini film.

#Kabali - Good work with the subtitles. @rekhshc and team. My Hindi friend was able to enjoy completey !! Thanks @beemji @theVcreations

Ashwin Krish: No big introduction. First frame is pretty ordinary. But there is a grand intro little later #Kabali
#Kabali doesn't have a single boring moment. But you need huge suspension of belief just like any bullet spraying gangster film
And if ranjith thought the last scene was cool. Film students may laugh

#Kabali
Santosh Narayanan BGM work is stupendous! The horn that comes is so haunting #Kabali
#Kabali Overall a party for Rajini fans. But for those that enjoyed Ranjith's Madras, better to temper your expectations

@BUSHINDIA an average gangster film sir. You should leave logic out. has a bit of an emotional thread in plot. Very disappointing

Muthu Krishnan: Halfway through #Kabali. #Rajinikanth rocks in this touching drama with a gangster backdrop. Good so far! #SuperStar

Sushanth Reddy: Interval. Non of the scenes worked the way they should have. Movie ran flat though out. Very very average. #Kabali

Waiting for 2nd half. @superstarrajini is back with his mannerisms
Kamalji: Dir @beemji has scripted #Kabali Flashback seq of Young #Rajinikanth very Powerful via his screenplay, "dialogues" looks & performance.

#Kabali 2nd Half Starts slow... emotional and picks up to Merisal Climax. BGM & DOP superb Climax cud hv ended with celebration mood.
#Kabali Over all See d Best Acting side of the #Superstar with responsibile plot taken & Fair execution , but could have been better.

#Kabali Salute to Rajini sir for completely trusting Dir Ranjith & giving scope for others to perform. 2nd Half was a treat to me.

Thanks to bay area cine industry friends, I got to watch a preview show of Kabali. I went in with no expectations and came out with mixed feelings. Kabali is paisa vasool for Rajinikanth fans while others can have equal fun mocking the aged superstar go through his paces.
The movie though, ends up as yet another commercial vehicle for the Superstar. Ranjith’s Dalit politics take a backseat here. Radhika Apte is apt in her role as is Dhansika. Watch out for a surprise cameo from someone you wouldn’t expect in a Rajini film. Neruppudaa is a surprising ear worm from Santosh Narayanan.
Newer Post Older Post Home