October 01, 2014 Gadgets Top10
The use of a tablet is meant to bring tech-oriented revolutions in our lives. Gone are the days when we used to rely upon heavy-weight computers and laptops for doing work and surfing the internet. These days, notebooks and tablets are in high-demand. Tablets are the mini mobile computers that contain display, circuitry and battery in a packed in small area. These are the form of digital mobile phones that bring lots of ease and entertainment to your lives. You can easily carry them anywhere and even keep in your room for doing some office work or just for listening your favorite songs. 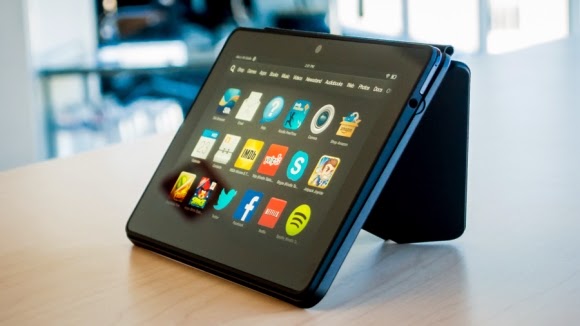 Kindle Fire HDX is a high-profile tablet. It is a third generation device by Amazon.com, and was released in October, 2013 in America. The tablet is featured with Quad-core 2.2 GHz Krait 400 CPU, 2 GB memory, 16/32/64 GB storage, 1.2 megapixel front camera, and battery up to 12 hours. This cool and handsome tech device is priced around $230, and provides facility of online shopping with hassle-free options.

Asus VivoTab Note 8 is a tablet from windows tablet family. Its design was presented by Asus, and is first small Windows 8.1 tablet. It is featured with a quad-core 1.8 GHz Intel Atom processor, a USB port, Wacom digitizer stylus, 0.85 lb weight, and 16 GB storage capacity. This device is priced around $249, and it was released in January, 2014.

This slim and sleek tab has been presented by Apple. The iPad Air is fifth-generation tab, released on 22 October, 2013. It is featured with built-in rechargeable Li-Po battery, oleophobic coating, Apple iOS operating system, 16 GB storage capacity, and 1.4 GHz processor speed. The price of this tab is also very affordable.

Dell Venue 11 Pro like a smartphone you can easily carry in your pocket. It is a presentation of Dell and has specifications like Qualcomm QSD8250 1GHz Scorpion (Snapdragon) CPU, 512 MB RAM memory, multi-touch display, 3-axis accelerometer, proximity sensors, and 5 megapixel autofocus camera. Priced reasonably, this tab is a must buy device for tech lovers.

Nexan 7 is a slim and smart tab. It is a development of Google and Asus, marketed by Google. It comes with Qualcomm Snapdragon S4 Pro Quad-Core processor, Google Android 4.3 operating system, and priced not more than 4200. This second generation tab also features unlockable bootloader, 2 GB of memory, a 1920×1200 pixel display, stereo speakers, and a SlimPort.

Samsung Galaxy Tab S 10.5 is a presentation of Samsung Electronics. This gorgeous tab comes with features like Wi-Fi, 9.74 x 6.98 x 0.26 inches dimensions, 10.5 inches screen, LED flash and 2.1 MP front facing camera. The device is quite light-weight which means it is easy to carry for international travelers. It also runs Android 4.4 operating system having an estimated processing speed of 1.7 GHz.